Iggy to Re-Release "The New Classic" With SIX New Songs 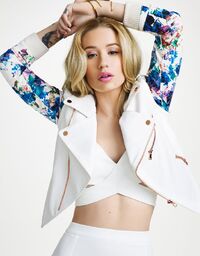 The New Classic was a gem all on its own, but just wait, Azaleans, because our favorite artist is re-releasing it with new tracks! Billboard reports that Iggy Azalea announced a re-release with SIX new tracks will be coming soon. In her tweets, she announced that she is shooting the album cover this week, and then tweeted to her fans that Ellie Goulding would be featured in one of the new songs!

Iggy has already had some major hits with songs like "Fancy" and "Black Widow" so we can't wait to hear what the new tracks will be like, especially that new Ellie Goulding one! What about you? Are you going to buy the re-release or is it just not worth it?