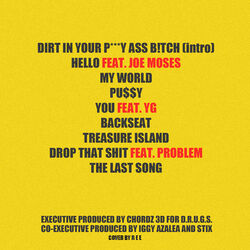 The mixtape was released on September 27, 2011. Iggy Azalea said she made the mixtape with "the intent to make people question and redefine old ideals." The mixtape was inspired by the late artist Jean-Michel Basquiat and aims to challenge the status quo in hip-hop with tracks like "My World" and "Treasure Island".[1] Even though Iggy Azalea hasn't released any of the songs from the mixtape as singles, she has released music videos for "Pu$$y",[2]"My World"[3] and "The Last Song".[4]