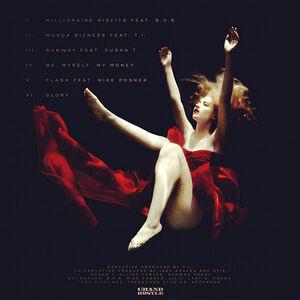 The EP serves her first project with T.I.'s label since the announcment of her signing back in March 2012.The EP features guest appearances from T.I.,who also serves as the project's executive producer, along with fellow rappers B.o.B and Pusha T as well as singer-songwriter Mike Posner.The EP's production was handled by Bei Maejer,Lil' C,Mike Posner and more.

The free-download EP premiered exclusively on online mixtape distribution platform DatPiff and has since then been downloaded over 50,000 times on the website earning a Silver certification status. It was also featured on their annual Top Mixtapes list of 2012.

Azalea's career took off in mid-2011, after several videos from her official YouTube account went viral, most notably her controversial music videos for her songs "Pu$$y" and "Two Times", the latter being a cover version of Gucci Mane's "Gucci Two Times." After releasing her first full-length project, a mixtape titled Ignorant Art in September 2011, Azalea aligned herself with Atlanta-based rapper T.I., eventually signing a recording contract with his record label Grand Hustle. With plans to release her debut studio album under the label, she put those plans on hold and on April 22, 2012, announced she would be releasing an EP titled Glory.The EP was supposed to be released in May 2012, but it got delayed and it wasn't released in May.On June 9, 2012, Iggy Azalea revealed that the EP will be released on June 16, 2012.Later the EP got delayed again, and it was released on July 30, 2012.

In an exclusive interview with AllHipHop, Azalea revealed the tracks on the EP were originally slated for her debut album The New Classic, and were recorded while she was in Atlanta and spending time with other artists on Grand Hustle: "Everything that got recorded for Glory, for the most part, was intended for my album and I was doing this record while I was in Atlanta with everybody from Grand Hustle like Trae [the Truth] and all these other artists, and I was just around stuff that was so ‘rap’." Her intent for the content on Glory was to satiate fans of more hard-rap records: "I like that ‘rap’ stuff as well, and I thought, ‘I want to make some songs like this and put them on my album,’ and other people weren’t really into that idea. So I thought I could put them out on Glory, because I still want to be able to give this to the world for everyone to be able to know that I can do these type of records."

She also defended her decision of wanting to release the project for free: "I just think that when you’re doing albums and stuff like that, you have to be more considerate of the other people that you’re working with or your label or A&R, and you have to appease these other people and for something like Glory. When it’s free, I get a pass to do whatever I like, and this is what I wanted to do, because of who I was around."

Azalea announced the project in late April via her Twitter feed, when she tweeted: "May = glory. The EP. #GLORY. I’m just onto something right now, the last two weeks and it’s glory. Azaleans need something new." Azalea unveiled the EP's cover art on June 27, 2012, a few days after she premiered her collaboration with label-mate B.o.B, Millionaire Misfits.

The project's lead single "Murda Bizness", was released March 26, 2012, and premiered by Azalea via her official YouTube account. The single was originally meant to be the lead single for her debut album The New Classic, but due to the delay, it was included on the EP. The song was produced by Bei Maejor and features T.I. rapping a verse. The "Murda Bizness" music video, directed by Alex/2Tone, was released on July 21, 2012. The video was inspired by American reality television series Toddlers & Tiaras.

The second single, titled "Flash", features vocals and production from Omega and Mike Posner. "Flash" was released on July 23, 2012.

Glory received mixed to positive reviews from music critics. XXL's Adam Fleischer claimed: "she’s still growing into herself as an artist, something she continues to do with her new Glory EP." Fleischer also wrote the best tracks on the EP are those with features: "Iggy is still navigating her way to be comfortable enough on a track to fully make it her own, which is why the strongest cuts on the six-track project find her bringing along a partner in rhyme to add a twist. Things kick off with the B.o.B-assisted 'Millionaire Misfits,' where an electronic/dance backdrop guide a slew of boasts, like getting '100 racks for a show.' After her single 'Murda Bizness,' with T.I., the 2012 XXL Freshman teams with Pusha T and slows things down on 'Runaway.'" Fleischer concluded with: "There’s a reason that T.I. brought Iggy Azalea to Grand Hustle, and it’s not just her long legs and blonde hair (though those attributes certainly don’t hurt her marketability). The up and comer has a personal history and set of experiences not typically told in hip-hop, and potential as an MC if she continues to hone her skills and learn from those around her. With the Glory EP, she heads in that direction."