4 My Ratz
by Iggy Azalea

Ljay Currie
4 My Ratz is a 4 track EP (Unofficial) released by Iggy Azalea via WeTransfer on November 7, 2017. It was released to hold fans over until the new year as a mixtape-style EP. It can be streamed on Dropbox here.

The EP was called 4 My Ratz as an inside joke with fans on twitter because Azalea's twitter profile picture was a picture of a rat. The EP was never released onto Spotify, Apple Music or any other music services, but was given to fans with a download link as a free project. [1] 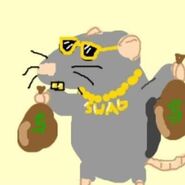